The mixer or muller is rightly considered to be the pulsating heart of tha sand plant. Obviously, it is the most important machine where ideal conditions of molding sand are restored.

The Belloi & Romagnoli P series mixer maintains all the technical features of the H series mixers with the use of a geared motor and electric motor.

In our opinion, to meet these requirements it is necessary to combine the activity of the mixer with a sand control which supervises its functions.

In fact, they are to be considered as two parts of the same system: arm and mind.

The mixing unit is composed of two rotary units rotating on their own axis and whose movement cover the whole surface of the tank ( CERAMIC LINED ). Moreover, mixing is integrated by a high speed rotor that guarantees a quick activation of additives.
The planetary driving system supplies a high speed mixing through each rotary unit. Every rotor is composed of three mixing arms provided with blades working on the tank bottom, all units are equipped with wearproof inserts. The mixing tank wall is kept clean by two scrapers provided with wearproof blades.
Used sand is put into the mixer through a measuring hopper placed on the top of the cover. Sand is put through a slide opening moved by hydraulic cylinders.
The combined action of rotary units – resulting from the sum of the speeds of planetary system, intensive homogenizer and mixing arms – allows to obtain an optimal mixing of ingredients with low specific consumption and high mixing efficiency in the cycle time.
Reconditioned sand is discharged through an opening on the tank bottom. Discharge door rotates in a horizontal plane and is moved by a hydraulic cylinder.
The main advantages of hydraulic motor in comparison with the traditional geared motor are:
1. high reliability and sturdiness with equal performances
2. possibility of optimizing mixing speed by varying hydraulic motor rpm
3. absorption of inertia due to accidental stops (blackouts) by means of the exhaust valve
4. restart of mixer at full load with the maximum torque available
5. less components to be serviced
6. possibility of positioning the hydraulic power unit in a safe and clean place.

The mixing cycle is the most interesting factor from which to obtain remarkable improvements of sand quality.
The mixing cycle consists of all operational sequences resulting in the production of molding sand. After various field experiences, we have inferred that the sequence with the best results is the following:
Inlet of water – Inlet of return sand – Inlet of additives – Mixing – Discharge
Here is a phase-by-phase analysis of the cycle:

The inlet of water must take place at the beginning of the cycle. Thus, the tank is systematically cleaned and also cooled. The quickest possible inlet of the maximum quantity of water at the beginning of the cycle allows the longest possible contact between water and bentonite and improves the activation of bentonite.
Moreover, water must be added without solution of continuity so avoiding successive additions in the middle or at the end of the cycle. This guarantees that water binds with bentonite and will not be found “free”, with all consequent damages.

The inlet of return sand must take place after water addition: for instance, if the cycle requires 60 liters of water, return sand begins to be charged after a water addition of 30 liters (50%). This percentage varies according to the tightness of mixer.

The inlet of additives must take place when all water required for the cycle is inside the mixer. This is needed to minimize any losses of additives due to suction effect. In fact, moistened sand incorporates additives more easily. The inlet of additives and water has to take place as quickly as possible so as to allow the longest possible contact between the different ingredients.
In brief, it is necessary to minimize inlet times in order to maximize the mixing time, which is the real active phase of the cycle.

Mixing can be divided into two precise phases:

Pre-mixing: washing water and return sand are inside the tank. During this phase, sand is moistened and prepared for the addition of other additives. This phase ends a few seconds after closure of the water inlet valve. This phase lasts from 4 to 12 seconds according to return sand moisture.
Intensive mixing: it is the phase during which all ingredients are inside the mixing tank and react to develop all physical chemical and mechanical characteristics of the sand. This phase lasts from 50 to 90 seconds. Lower mixing times usually cause a lower green strength value and a disomogeneity of the product; higher mixing times often do not result in an improvement of characteristics, but only in a higher expenditure of energy and in a reduction of productivity.
Discharge is to be considered a secondary phase. It must be reduced to the minium in order to recover time to be devoted to other phases or to be deducted from the total cycle.
The above-described mixing cycle is to be considered as the result of the operation of the intensive mixer and the work of the automatic bond determinator GSC. 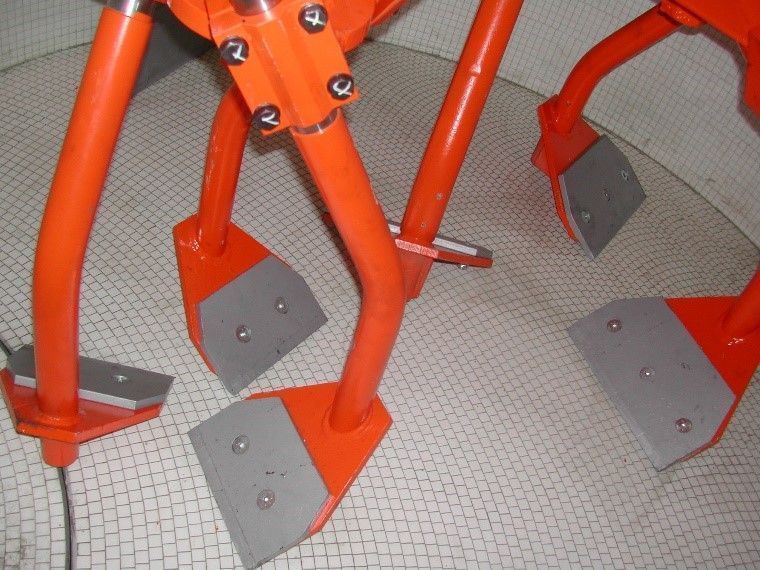 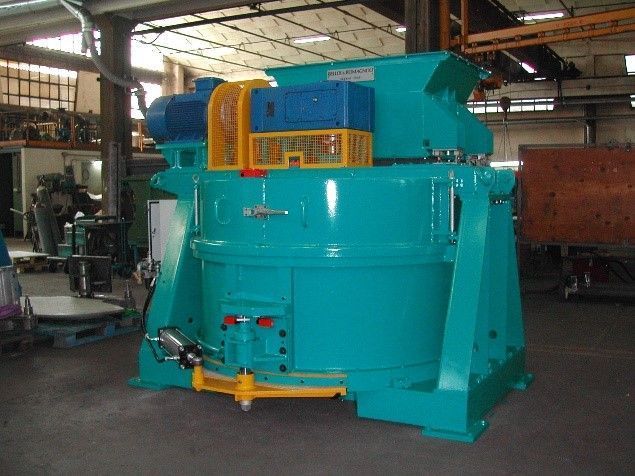 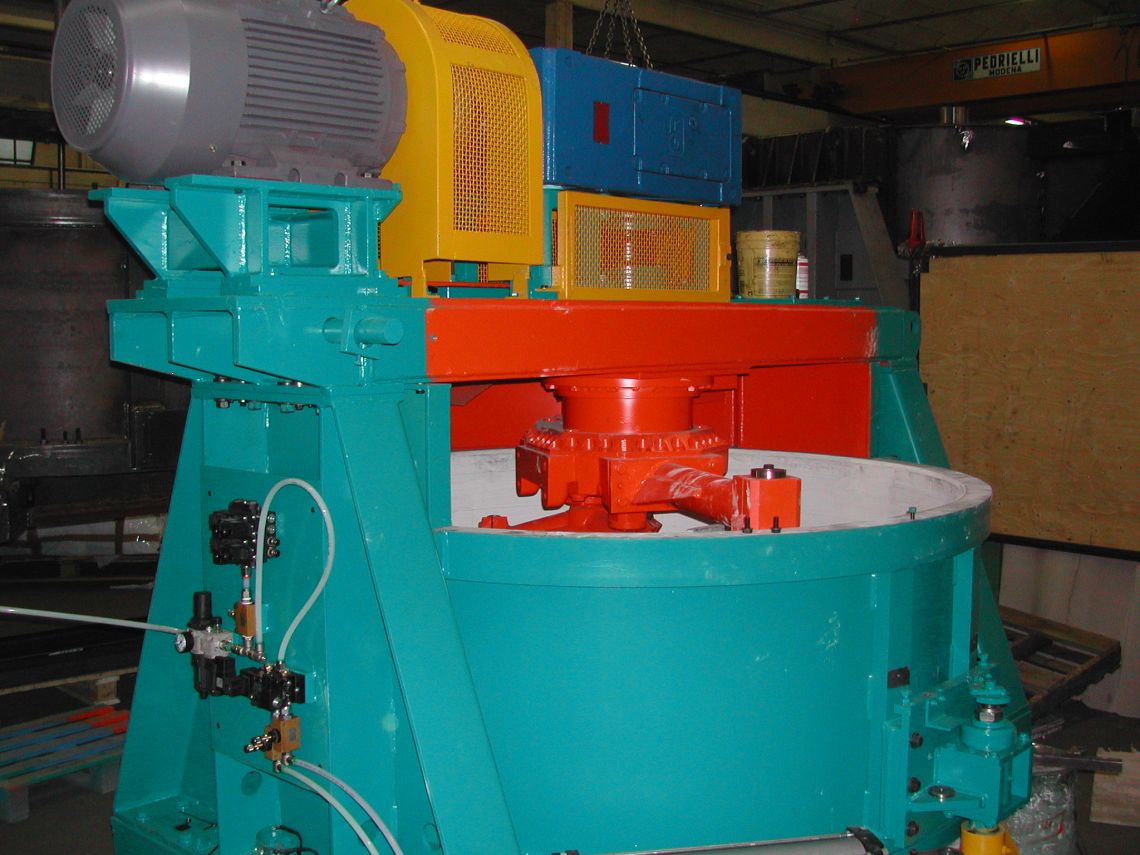 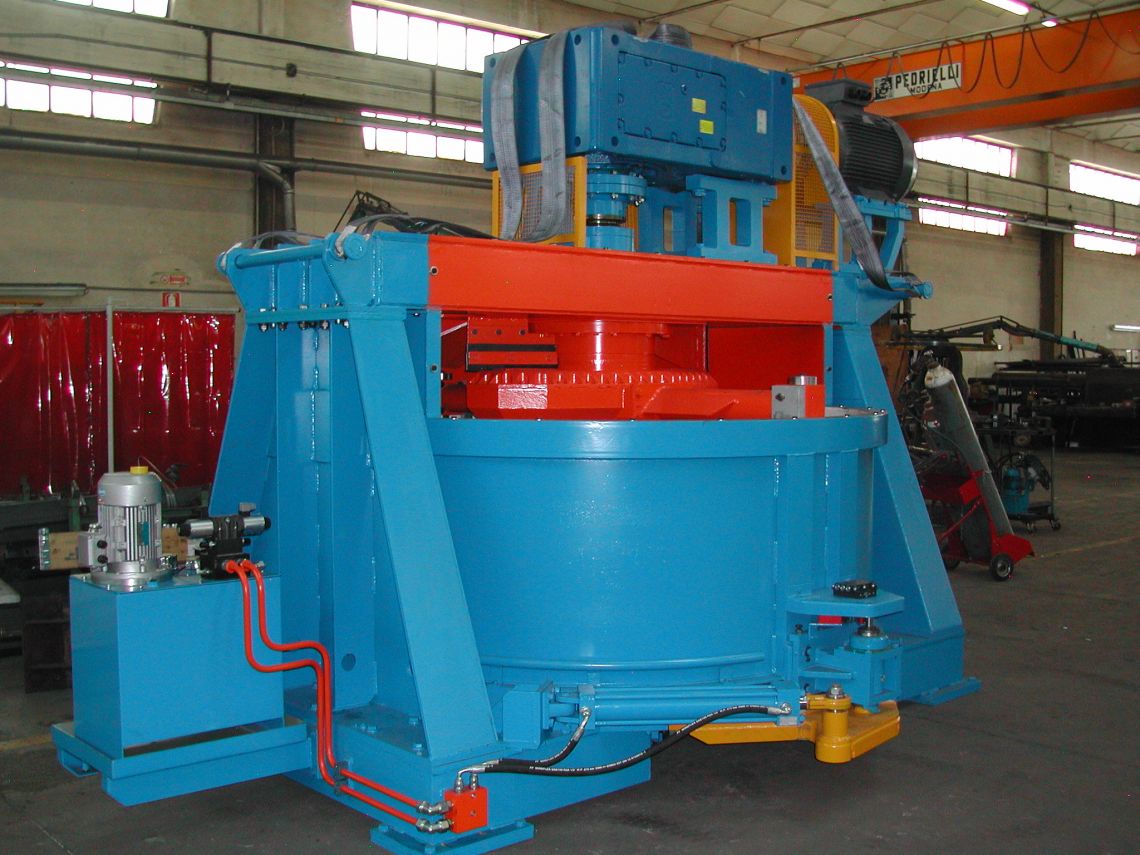